Need Out of the Box Thinking? Get off the typical road! 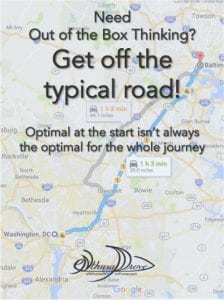 Try this approach – it’s how I get my GPS…and teams… to creatively find ways around the well worn thought patterns.

Recently I was driving home to Lancaster, PA from Dulles airport, nominally a 2.5 hour drive. But the Google Maps app was estimating over 3 hours, due to a jam on I-95 north. It recommended a sidestep to miss some of it, but I wasn’t liking the option. That recommendation saved less than 10 minutes.

Coming north from DC, there are three significant options off the top of the beltway; I-95, the Baltimore Washington Parkway (295), and good old US Route 1. Route 1 is the slowest as it’s just a 4 lane road, with traffic lights.

As I came to the top of the beltway, I saw the traffic warning signs still flashing about the jam on I-95 north, and yet my GPS was still sending me that way. I thought… I need to get this app to be more creative. So, I chose Route 1. Actually, that was a good short term answer as it was faster at the start, but it would be painfully slow to take Route 1 all the way to Baltimore. I turned my GPS off. Sort of a reset. Then, after a mile on Route 1, I turned it back on. I knew this would make the GPS look at the situation differently.   Now mind you, Route 1 is right in between I-95 and 295, so one would think that the GPS would just direct me back onto one of those two options. After all, I had only gone about a mile. But, it didn’t.

It recommended an entirely new route that showed a savings of over 20 minutes. It included some secondary roads and actually dodged me west instead of north so that I ended up taking I-70 to the Baltimore beltway.

I have no clue how the Google programming works, but here’s my guess based on what little I remember from my optimization courses in grad school. I think by selecting Route 1 on my own, I gave the algorithm a local optimum that triggered a new starting point for solving for the overall optimum. But, the math isn’t my point.

The Idea: Optimal at the start isn’t optimal through the whole journey

I find that when I need a group to get away from an obvious answer, one that still has lots of problems associated with it, I get them to consider an obviously less optimal answer, and work it out from there.  Just like with my GPS, once they are a few steps down this new path, other ideas start to pop up.  I put them on the equivalent of Route 1…it’s never the best answer, but it could work. By forcing the group to start down the seemingly less preferred path, they find new ways that then opens up big gains.

So, when you have a team, or your GPS, that seems to keep going back to a typical answer and you’re thinking…’we can do better than this’… turn off the automatic thinking, put them on a different path, one that seems like you shouldn’t take it, and let them figure it out from there.

If nothing else, this will give you a new saying. You can stop saying “think out of the box” and start saying “get off the typical road.”

And, for those of you wondering. Yes, I’ve done this trick with my GPS several times. Doesn’t work so amazingly every time, but I always like the idea of partnering with the technology, rather than being a drone.