Where Is The Super Bowl Talent On Your Team?

Talent Lovers: Are you ready for the Super Bowl?

I can tell you that living in the Pittsburgh area means Super Bowl Sunday celebrations. This is true even on the years that the Black & Gold faithful begrudgingly accept that Steelers are not playing (like this one). It is a reason to come together in the grips of winter for a bit of companionship, chuckle at some ads, and hope to not get stuck in the snow.

As we scurry for game day munchies, all the Super Bowl commentary (and, there’s enough to make our head spin!) gives us an opportunity for self-reflection about finding talent for our teams and developing that talent.

How do you find the ‘Patrick Mahomes’ on your team?

I happened to read an article in the Wall Street Journal (though this was with the hype of the Bowl Championship Series, it applies at the NFL level too). The article showed how all the statistics and awards don’t translate to success at the next level (the NFL).

It got me thinking about how hard it is for us in business to figure out who will succeed as Project Managers and Team Leaders. We look at past performance and put our trust in that equaling future performance. It isn’t that simple, this and other articles indicate. Just like football teams, project teams are in the game of identifying and utilizing talent well.

Looking at who succeeds and who doesn’t in the NFL makes for good reflection on success on our project teams. Interesting that such accomplishments as Heisman Trophies and amazing seasons with other teams are not reliable predictors of success.

Many times, as project leaders, we want to stock our teams with all those first-round draft picks and we feel a bit slighted when we have to settle for 3rd or 6th round picks (or free agents…gasp!).

Well, the good news is how likely it is that those later picks will end up being…well, like 6th round pick Tom Brady. Yes, that powerhouse QB for the Patriots was a 6th round pick. On the other side of the football, Carson Wentz actually was a hyped 1st round pick, but it may really be his off the field leadership that got the Eagles to the big game in 2018.

Talent Analysis: Is it worth it? 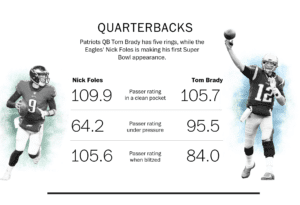 I think its fair to say that NFL and elite college football players have more analyses and statistics done on their every move than our average project team member. (If you’re doing more stats on your project team members than the NFL, we’d like to hear about that!)

Therefore, these analyses should be super accurate, right?!?! Actually we find that even though there are scores of scouts, commentators, analysts, statisticians, and coaches, some star players are missed (and shine through the noise to make their own name) and some super-hyped potential turns out to be super-disappointing (just ask Cleveland about that).

Since all the analysis of football players doesn’t get us predictable quarterback success, how can we expect that for our project team talent selections?  Let that be a lesson to us when we try to put our team members into just a set of numbers.  The gift and mystery of human potential and teamwork are beyond our capacity to quantify sufficiently to predict future success.

How do we find talented project superstars?

As project team leaders, we may not get to choose our team.  Sometimes we inherit an established team. Even if we get to select members, we don’t get to select the applicants. There’s always an element of working with what you get.

If you pre-judge a team member based on past performance you may miss the next Tom Brady.  Analyzing past performance is not an indicator of future success (just ask your financial advisor or anyone that bet against Brady).  If that’s the truth, what is a project manager to do?  Without a predictable process, what will we do?!?! (subtle sarcasm intended…)

This comes down to a choice for you as a leader. Your mindset matters.

Do you believe that the teammate should not have been offered up as a draft pick for your project?  Do you think of them as a washout Heisman winner?  If you have this perception of your teammate, it is affecting the reality of how that teammate performs.

Great leaders, like great coaches, can consistently find the potential within their teammates and draw that out to help them be the best that they can be.  How do they do this? Belief.

The belief that the people on the team can be the best they can be right now. A leader sees potential because he/she believes there is potential.

Thoughts and Actions…What to do now?

As you sit down with your friends to enjoy this year’s game, here are some things to think about:

We have some resources for you to put that belief in your team into action. Our three-part series on building your team by connect, create, and contribute takes that belief and finds real things to do to implement it. 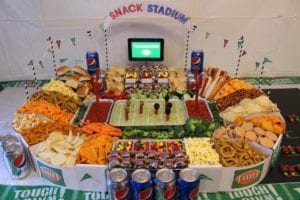