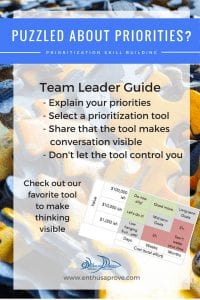 Do you ever feel like you’re drowning in priorities? Too many projects, ideas, or initiatives…and there is never enough time or resources! We have seen this sneaky tyranny gobble up more than one leader and team. The laundry list of initiatives or tasks your team (or your stakeholders) would like to take on rivals solving world hunger and making world peace, so you know that you need to prioritize that list.

As the heavy sigh comes out and look of overwhelm weighs on your shoulders, you wonder… how can we ever find our way through to what we can or should do?

You gather the team together to prioritize initiatives. Our experience is that prioritizing the list almost equals the difficulty of creating the list! WHY?

There are so many ways to interpret what is a “priority.”

Priorities are funny things, because my method for generating high priority is different than yours. We use the term priority so broadly. For some, top priority is that which must be done first because of sequence in the to-do list (or project plan). For others, priority is an indication of something more grandiose, like how directly a given task or initiative contributes to a greater goal. Both are valid reasons to complete one initiative before others, but the two people holding opposing views often are confused by each other.

Recently I was helping a team who had a list of about ten initiatives. They wanted to prioritize the list. We decided to use a tool called a pair-wise comparison. It’s a simple head-to-head comparison of each initiative to the others. With 10 initiatives, there would be 45 comparisons to be made. Then take into account the factors to consider with each one, like do-ability, affordability, desirability, stakeholder value, and value to the goal. Ooof!

With that many comparisons to make, what happens in your head? Information overload!

In reality, we have to make decisions like this, so what do we do? Our brain combines all these things in a murky process of mental gyrations. Mix that with an inkling of priority, and out pops, “I’d rather do A then B or B then A.” We come up with reasoning to explain ourselves to our teammates, then hear their decision-making process/viewpoint, and then come to a collective decision.

It’s somewhere in this murky process (or in anticipation of it) that many teams call for a facilitator (like us) to help. It takes you, the team leader, out of the facilitator process role so you can focus on content. Also, many leaders want the unbiased facilitator so that they aren’t blamed for putting their own bias to the decisions. But anyway, back to the story…

The particular team I was working with to prioritize the 10 initiatives was getting hung up on my terminology, insisting that this wasn’t about what the team would rather do, but about priority. Peculiar… hmm. At first I was puzzled, but then … A-HA!

I gave instructions to the team in a way perfectly clear to me, but turns out their mental process was different, and needed different terminology. We worked through it to find the team’s priorities that they could support going forward, using a smattering of the following tools and thought processes.

1) As a team leader, explain what prioritizing factors mean a lot to you. Is it the sequence, the bang for the buck, the political attractiveness, the motivation? This is not to bias the process. As the team leader, you do this to set a stage for team alignment, to keep the group navigating towards its vision, its goals.

2) Select a prioritization tool, (options described below). Explain why you have selected a certain discussion tool. It may be to:

3) Share how the tool is just a way to make conversation visible. Don’t let them get legalistic about the tool, numbers, and rankings. They are still the experts, not the tool. The tools serve the team; the team doesn’t serve the tools.

4) Do a gut check. Never let the results of the tools accidentally hijack the true team priority. Sometimes our tools are like the American voting system, wherein there is a difference between electoral and popular voting. Tools do a good job of leveling the playing field, giving voice to the quiet and to visualize the thinking. It’s a process, but it’s not perfect.

You can find this one with a quick google search – it’s very popular. It is a simple sorting table to establish bang for the buck. I’m always surprised when I introduce it and folks are amazed. I think it’s old hat, but it’s a good old hat. It works like a John Deere hat that’s got a couple years of sweat stains discoloring the green. In our years of using this good old hat, we’ve developed our own ways to use it. It’s just getting broken in I guess.

Our Version of the Pick Chart 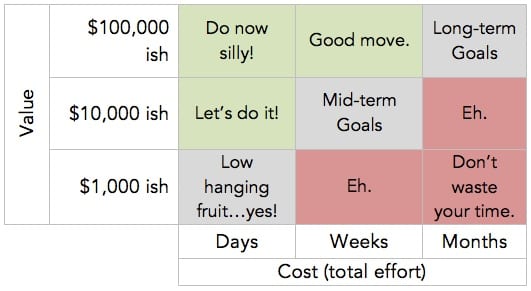 Note: I’ve also used versions that go from weeks, to months to year and from thousands to ‘hundreds of thousands’ to millions. Scale it to the units of measure that make sense to your team.

What is different (and why)

The big jumps between each column/row and the easy to grasp terms are the keys to this tool’s success.

This tool is for those monster lists that range from buying better pencils to buying out Amazon, with everything from free parking to better leadership thrown in between. The voting matrix helps to segregate and prioritize into groups. But this is a bear to do! If you’re interested in learning more, let us know.

The ‘Let’s Duke it Out’ Method

This is the often-applied method that has no formal process to sort and make thinking visible. Usually this leads to the loud voices winning out for the day, with the quiet considerations not seeing the light of day until later. This can work for the day, but likely leaves out important considerations that the team learns too late.

This is the priority driven by commitment. I love this model. If there’s No Ownership, then there’s No Priority. This is essentially putting up the initiatives and seeing who will own up to taking accountability and responsibility to get it done. This helps to drive out those nice sounding initiatives that really we hope someone else will do.

When we at eNthusaProve work with a team to prioritize items, our goal is to make that murky personal mental process visible as much as possible. We find this is the most helpful to teams to understand each other. In the case of this team, the confusion of personal “druther” was just a start to the team conversation. Each team has to walk through the murky waters in order to clear them up and work on the work that matters and will get them to the end goal of the project. How do you guide them?