Not Aligned or Not In Agreement? 4 Steps to Seeing the Difference

“I need to realign their expectations.”

“We don’t seem to be in alignment anymore.”

Sound familiar?  Are these really about alignment or are we using the word alignment as a euphemism word for agreement?

Alignment and agreement are not the same.

This came to light especially so in a recent team episode. The team leader was struggling to get the team to do what she wanted, so there was a fair amount of frustration on her part. She had inherited the team from a leader who had been relatively heavy handed in his approach. Sadly, this new leader appeared to be copying that behavior rather than learning from it.

During the meeting, she had stated several pieces of information that were clearly wrong. So, a team member, who had been a member of the team since its inception, spoke up after the meeting had pretty much finished and only a few of us were in the room. I am assuming that he, like myself, thought that allowing her to continue with those misconceptions would have probably led to bigger problems downstream.  He politely pointed out how we, the team, needed to make sure that we didn’t move forward with those incorrect interpretations of what the team has done, who they report to and how they managed their work.

The team leader was understandably taken aback to hear that so many of her premises about the team, its agenda and its past were clearly not correct. I would guess, from what happened next, that she took that as a threat, not just clarifying some historical context of the team’s work. Instead of valuing this team member’s input, the leader contemplated another path, one that, sadly, we hear of a bit too often in the news from Washington DC.  She stated to others that maybe it was time to get rid of that team member; that he was “misaligned with the team goals,” not that he disagreed with her perspective of the team’s backstory.

The episode highlighted a question for all of us when we lead a team.

How does disagreeing with the leader become being misaligned with the mission?

After all, the leader espouses the vision, and is the one who needs to decide which path best pursues that vision. Is disagreeing with the path the same as being misaligned with the vision? How is a leader to know?

In the story I told here, it would have been easy. All of the points of disagreement were based in history; they were easily verifiable.

But most disagreement occurs not on what happened but on what we want to do next. That information is not based in fact but rather on intuition and prediction. So, it would seem that if one is disagreeing with the leader’s idea of the best road to take, then does that also mean the person is misaligned with the leader’s vision?

Probably not. Let’s just run with that road metaphor.

Before we had GPS on our phones that tell us turn by turn, with updates on traffic, there were lots more front seat discussions about ‘why did you turn here’ and ‘I never go this way’.  Those disagreements were never about being misaligned. Though one person thought we should go over the river, and the other thought we should go through the woods, we were aligned about the goal; getting to Grandma’s house for homemade cookies.

Most efforts in business are not this simple, and the agreement on which way is critical since in reality the whole team is driving, so we can’t half the team prepping to go through the woods and the other half prepping to go over the river.

This is why on any team, continually connecting and affirming our connection to a vision or goal is so critical.

That vision or goal is the ‘common ground’ that serves as the lifeline as members test the waters of possibilities on how to achieve that vision, test how to learn from the team’s history, and test the ideas of paths untried. We all know that we need that creative tension.

For parents, this is a common situation. I know that my wife and I are very aligned on what we desire for our children; that they become responsible, trustworthy adults. However, along the way, we often disagree on various decisions. We would need to use that alignment to explain our choice: one of us would explain how letting a teenager to drive somewhere was getting to our ‘responsible’ goal, and the other would explain how not letting that teenager drive would get to our ‘live to adulthood’ goal. It was a continual affirmation of our alignment, but in the end, as a team, we needed to agree what we’d tell the teenager, while also recognizing the creative tension that is part of dynamic parenting. 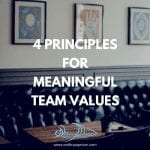 Being aligned speaks to our commitment to our higher purpose, and frequently to how we live our values, and therefore speaks to integrity and trust.

Being in agreement is about steps and actions along the way, and is tied to our perspectives of how actions will support, accomplish or manifest those values.

When a team member is not aligned it means they are going toward a different goal than the rest of the team.  This is why the story I shared at the beginning cuts to the core.  It was an example of a teammate sharing a disagreement about historical facts he saw a pertinent to the future actions of the team that was taken as misalignment.  It is like being kicked out of the car because of wanting to go over the river vice through the woods.  A serving leader considers respectful disagreements like this, because without it the team will go off the ‘road’ if no one has the guts to speak up.

Do you want to make sure that you don’t mislabel disagreement as ‘not being aligned with team goals?’  I’ve got 4 steps for you.

We all know that when a leader lets her or his ego get in the way, they tend to hear all things that are new or different as threats to his or her own ideas. Ego-driven leaders look for compliance, not connection, not creativity. Alignment is not about compliance but about each team member contributing towards the goal…and those contributions are not the same from each member.

When we as team leaders get frustrated, we are already disposed towards casting the blame at others (or stop believing in them), or we start thinking that we were given a bad hand to play (meaning we’ve gone from leader to victim). (By the way, we just described something called the Fundamental Attribution Error – if you want us to share more about this in a future blog, let us know.)

When a team is not achieving desired results, we get frustrated, and frustration turns to anger and anger finds a target…usually the team members. We start seeing them as the problem.  That is usually signal that we are quite possibly trying to be the source and summit of the team’s work.  When that is happening, and it’s frequently subtle or subconscious, we are letting ego get in the way of being a good serving leader.

If we feel frustrated or confronted when a team member proposes a new idea, or a different perspective (assuming it’s done without whining and with respect), that needs to be a signal to step back and be thankful. And, oh my, that is hard. Breathe.  Find some way to be thankful.  Thankful that the teammate spoke up (albeit maybe imperfectly).  Thankful that this team exists and is making progress.  Thankful for the opportunity to clarify the goal so we all see the future clearer.

This helps us to seek to understand how that seemingly wrong idea could actually get us to our goal.

If after being thankful, we still think that person is misaligned with the vision, then we need to re-affirm the vision.  I find that, similar to the parenting example, we need to have them explain how their recommended action gets to the goal, and, like that example, it’s often a case of one of us prioritizing one aspect of the goal, and the other prioritizing another aspect of the same goal.

I suggest using the approach called common ground, that we shared in an earlier blog.

To serve as a double check on whether your ego is steering your leadership, always be attuned to signs of team compliance, i.e. everyone passively agreeing with you. Not only is that a warning that you’re not being a serving leader, it’s also an early warning that the team is losing its ability to create and contribute. In other words, no one is speaking up to see if going over the river really is still a better way than through the woods to grandma’s.  In all reality, this could be the real reason for the lack of results that is causing your real frustration, and getting there so late the cookies are gone.

Other Blogs about Leading Well: 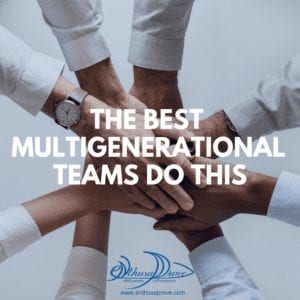 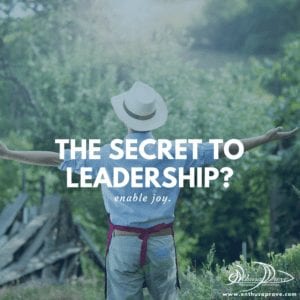