Improving Process Thinking: Are you just saying “throw a strike?” 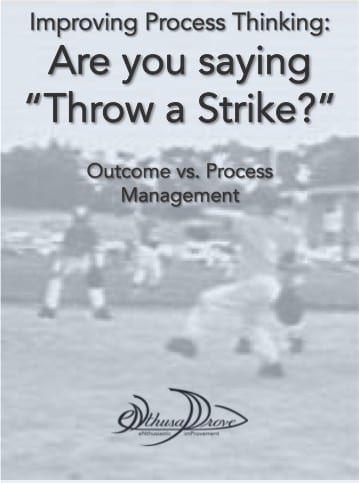 It’s spring, and time to think baseball.  It may also be good time to get our processes in better shape, so here’s a story to help you differentiate process thinking from outcome thinking…critical to process improvement.

A while back, I was helping a good guy coach. An accountant by profession, it did seem that the scorebook was his favorite piece of equipment, but he was a nice guy and he wasn’t a screamer. (keep that in mind…it sets the tone)

In this one game, the coach’s son took to the mound. He was one of the better pitchers in our league, a tall kid with heat and control. But on this day, it would be different. As the first pitch left his hand, I thought to myself “that’s not a strike.” It was low outside, the ump called “ball”. His Dad then provided this advice to the mound.

It was said encouragingly, not even sternly. It was just a clear reminder of the desired outcome. I thought jokingly to myself, “I guess the kid didn’t know that was the goal, but now he does.”

As the next pitch was released, I had the same thought as on pitch one. Same result. Same call from the ump.

And the advice from the coach was also the same; “throw a strike.”

This went on several more times. It became clear to me that this coach didn’t even need to be watching the game. When the ump called ball, he provided the same advice. Granted, sometimes he said “hit the glove’ or “get it in there”, but he was only reminding the pitcher of the desired outcome.

This happened 15 times in a row. We now have bases loaded and a 3-0 count. The next pitch went in and the ump yells “strike!”.

What do you think is called out to the mound?

“Do it again.”  Said encouragingly and hopefully.

At this moment, the young pitcher starts to cry. And this is the a-ha moment.

Why? He had no idea how to do it again. He had no idea why pitch #16 was any different from the first 15! He wanted a ‘strike’ outcome probably more than his coaching Dad. But he had a faulty process, and his coach was only giving outcome advice. While I can’t say for sure what the coach was thinking, his verbal advice only showed signs of outcome thinking, not process thinking.

So what would process thinking and advice been like?

First off, process thinking would focus on the pitching process, in this case, because that is where the work is done, not where the QC check occurs (at the ump). When I watched this young pitcher, I noticed that he kept pointing his front foot to first. That tends to send the ball in that direction and sure enough, those 15 pitches were all down and outside to the left. He had a faulty process. The call by the ump is just an outcome call about the fitness of the process. To get different results requires more than just asking for better outcome, we need a different process.  Change the pitcher’s process.

So, when we as managers or leaders do nothing more than essentially say “do it right” when it’s done wrong and “do it again” when it’s done right, we are outcome managers. It’s not that we are mean, but sadly that approach is sort of cruel. We are not providing any insight or information. The person in the process already knows that, just like the kid frustrated to tears on the mound.

Process management looks at what to change in the process.

Looking back, I should have had the guts to mention that foot thing, but I didn’t. I made the insanity mistake, i.e. hoping that we’d get a different result by doing the same thing over again. I’ve learned better along the way.

I’m not coaching baseball anymore, and I miss it. But I’m coaching people nearly everyday, as you probably are. As you do, are you looking at what’s happening on the mound, or just managing by reacting to whatever the ump… or the boss, or the customer or the data (i.e. the outcome) says? Are you coaching to improve the process or are you just saying “throw a strike” and “do it again.”

Let’s LEARN to throw strikes. Go to where the work is done, study the process, and change the process. That’s process thinking.