Building Boot Camp into Your Team 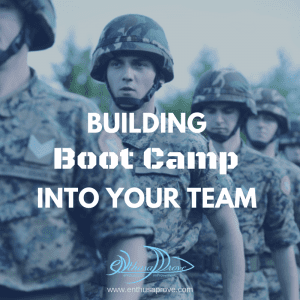 Memorial Day honors all those in the military who have paid the supreme price to preserve our American privilege of life, liberty and the pursuit of happiness.  Please take a moment to think of those brave men and women this weekend, especially when you drive past a cemetery seeing all those American flags.

This weekend is also considered the start of the summer vacation season.  My wife (and eNthusaProve President) Diana and I have a little cottage that we operate as an AirBnB.  It’s been a fascinating learning experience serving others and helping them have a moment to relax.

We have had the pleasure of hosting young military leaders and each of them have made a distinct impression on us. It just happened again this past week as we hosted a young West Point cadet and his friend.

We have found the AirBnB concept to be remarkably simple and robust.  Since the guests and hosts each are rated, it’s different than a hotel experience.  We have had over 100 guests and only 2 have been ones that we would not invite back. However, the others have not been like hotel guests; they are more like grateful friends given a place to stay. Many times, the guests will strip the beds or start the wash.  We have noticed though, that when young military leaders stay at our cottage, it is nearly in better shape when they leave than when they arrive. (The only exception is they eat all of the food Diana provides – they are definitely not picky eaters).  Their diligent clean-up is notable since several have only been there for overnight stays as they were driving through the area with their loved one on very quick timelines…i.e. in late, out early.  Why is that?

Personally, I think it’s due to a lot of factors, but it certainly seems to resonate with what we talked about in our blog mentioning Jordan Peterson.  Similar to Peterson, this behavior resonates with the popular commencement address by Admiral McRaven.

My interactions with these young military leaders taught me that many Millennials are not afraid of hard work and stamina to render 24/7 respect of those who serve them and those they serve.  I know what you may be thinking: hey…those military folks went through boot camp!  We can’t do that in our company!

While I definitely see the merits of a boot camp experience (because I know how good it was for me as an 18 year old), I’m not recommending you need to have one. However, I’m thinking that in your leadership development regimen, your coaching of young leaders, you can emulate aspects of it to attain some key desirable leadership outcomes:

Application Idea: Promote informal conversation between people whenever possible.  For example, institute a “no cell phones in the meeting room” policy. Rules like this spark talk about how the family’s doing, or the game last night, or the progress on a report that build trust between teammates.  Yes, you have to have some sort of draconian rule to get people off their devices and interacting with each other.  This takes time; be patient.

Application Idea:  Are you building skills and capability in your team members, or are you only using the capability they have now?  Encourage them by investing in them: Help them find a mentor, find opportunities for them to get visibility using their strengths, allow and encourage them to take challenging education opportunities.  Find opportunities for likely failure and encourage taking them on.  The failure is a great teacher, and unlikely success a huge motivator.

Application Idea:  What is really important to you, your team, your company culture?  Identifying a specific few, rather than things like “excellence in everything,” helps build a culture worth preserving and changing to survive.  We put together a quick values exercise for you. 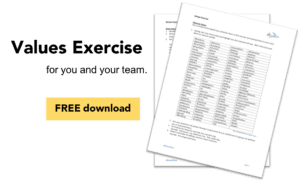 Application Idea: Robert Greenleaf was the pioneer in writing about servant leadership.  He devised the Best Test to evaluate your actions with your team to determine if you are truly serving others.  “The best test, and difficult to administer, is: Do those served grow as persons? Do they, while being served, become healthier, wiser, freer, more autonomous, more likely themselves to become servants? And, what is the effect on the least privileged in society? Will they benefit or at least not be further deprived?” The Servant as Leader by Robert Greenleaf.

Here’s hoping that this Memorial Day you take the time to remember those whom we pause to memorialize, those who have served us in a way that cannot be measured. “Greater love has no one than this: to lay down one’s life for one’s friends.” (John 15:13).  Thank you Veterans, who give of yourselves for our common good.  We appreciate you.