One Essential Component to a Great Team 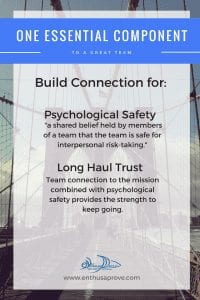 I’ve been part of some all-star teams and some real duds. How about you?

Do you have theories on why some failed where others succeeded? Creating an all-star team sometimes seems to be more art than science…maybe even a bit of luck.

We at eNthusaProve have always believed that creating strong connections to the project purpose and between team members is a crucial part of creating a great team (see our method here). Recently I came across an article that just seemed too good to be true. It promised a Google study found that an all-star team could be predicted statistically by looking at ONE SINGLE ASPECT?

When I saw the story come by my screen, I was thought it was just click bait, hoping to pique my interest to get a click. But it had. I fell prey to the click-bait! Reel me in NY Times…reel me in…

The Google research showed that there was in fact one attribute that was the best predictor of team success, with a few others very close. What did they find to be the key to all our team building dreams?

Google found that psychological safety was the biggest single indicator of team success (defined as getting projects done on time/on budget). Whoa…hold the show.

A highly relational, fuzzy thing is the biggest influencer of hard project metrics?!?!

Why yes, yes it is. Says the big data nerds, backed up by organizational scientists and psychologists (the experts on fluffy). Maybe that’s why creating a great team seems more like an artistic muse than a statistical correlation.

The research presents two attributes of psychological safety. The idea is to establish team norms that encourage:

These two factors raised the efficacy of the team consistently and helped them succeed on projects, whether technical or relational, innovative or rote. The collective intelligence of the group improved when psychological safety was present. Teams that had higher intelligence team members with low psychological safety did worse, because they saw the team as giving out individual assignments rather than collaborating.

This idea further heightens our awareness of making connections to mission and team members, the first step in enabling joy in work. When we make stronger connections, we also build skills foundational for conversational turn taking and social sensitivity. These things build trust in teammates to talk to each other unencumbered (crucial). We have found that this deep trust also needs an outlet, which is connection and dedication to the mission. When a group that trusts each other latches onto a great mission, that’s an unstoppable force of a team, and one anyone would want to be part of.

An Application of Psychological Safety

At the time I read of the Google study, eNthusaProve was working with a safety conscious electric utility that was transforming the way they did projects. The culture around working as a team was central to that transformation. It seemed natural to use the idea of psychological safety as a way to build connections within the team and to the mission.

What a cool idea, huh! Safety is paramount for all of our technical and industrial clients. In this meeting, the team plastered a wall with the “reasons” they stayed safe at work. What were the reasons? It was a family picture mural that drew significant attention during our all hands meeting. Everyone wanted to scope out the cute kids, vacation pictures, and Christmas family photos that lined a large wall of the ballroom.

This was cool to emphasize physical safety (we all want to go home safe to these loved ones), AND it also built social sensitivity (hey these are people too!). It was amazing to see people getting a larger context of their teammates by seeing their families and hearing the stories of the pictures on the wall. This develops rapport, which is the foundation for connection to and caring about another person.

We developed a tool for this team to describe the journey to developing engaged teams with a two-axis model. Both axes start in the same place, with an initial connection and foundation for trust. The vertical axis is a personal journey from connection, to creation, and contribution for impact (see more on our model here), creating engaged teammates. The horizontal axis is a team journey toward building interactional safety and trust to last the long haul as a team.

This model fueled discussions in the teams to pinpoint areas of opportunity to build stronger connections, strengthening them for the rocky transformation ahead.

Is your team in transition? Working through conflict?

Many teams I see try to make it through without looking at these “fluffy” aspects of teams, thinking that teammates will “suck it up” and “do their job.” And people generally do. There’s also the classic “we’ll make it through” and “we don’t have <time, talent, money, resources> for all that.”

That’s the thing about this study that boggles the mind. If you don’t have psychological safety, you project is likely to suffer from being over budget and late.

I know you really don’t have a lot of time to devote to these things. That’s why we are here for you. We are putting together a course of resources of easy to implement ideas. How do we know they work?  Because we’ve used them!  The course will contain:

For those that signup to be an early bird for the course, we are offering 50% off if you sign up before Oct 4, 2017 at 11:55pm.  The course is set for publishing on October 9th.  This is going to be a huge value!  The course is normally $40 (not too shabby as it is), but you can get it for $20 before Oct 4 with code HALFOFF. Get the course here (Building Connections to Foster Psychological Safety).

Those that signup as an early bird also get to be influencers to us by leaving comments on the course website of what you are excited about and what else you’d like to see.  We will integrate early bird’s requests as much as we can!

Take the benefit of Google research!

Hey, Google let us in on a critical component of team awesomeness that they researched for 5 years. I encourage you to take it to heart. Building psychological safety is critical in creating stronger connections on your team, helping them weather the long haul of the life as a team.

If you want your team to succeed, you need to build connections to the mission and between teammates. We found using a graphic, group activity, and discussion questions worked well for our client when we merged this with the personal journey toward an engaged team (connect, create, and contribute).

Find our guide to developing strong connections to the mission and foster psychological safety. Big data, ahem Google, has proved it’s worth the trip.