Learning to Lead by Stepping Back

What Does It Mean To Lead By Stepping Back?

Recently I read The Servant as Leader by Robert Greenleaf as part of the Greenleaf Center’s Foundations Certification course, which I took with my friends at Third River Partners.

In the essay, Greenleaf proposes how one can test his or her effectiveness as a servant leader with reflection upon the “Best Test.”

When you are serving another person or group of people, ask yourself,

“Do those served grow as persons? Do they, while being served, become healthier, wiser, freer, more autonomous, more likely themselves to become servants?”  – Robert Greenleaf

Hearing this test of servant leadership abilities was particularly poignant for me in my role as a mother. My little guys are joys and blessings that I thank God for every morning. Even so, when the oldest was a baby he would wake in the middle of the night (like most newborns) and it was easy to lose sight of coherent thoughts and the greater goal of how to best lead my son. 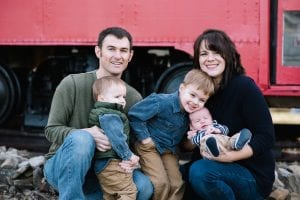 At about 2 months old, my baby started sleeping from 10pm – 6am most nights. We were overjoyed and thankful. On the nights he didn’t sleep peacefully though, my patience quickly wore thin. (Who said sleeping like a baby was a good thing?)

At about 4 months old I would wake to the sound of cooing, talking, or crying. Once I determined he wasn’t hungry I would let it go for a while knowing that I should let him work it out on his own… especially if he was just talking to himself. After a while, I wanted to go back to sleep, but I can’t sleep with the baby being awake! So I’d get up, go in his room, put the pacifier back in his mouth, and go back to bed trying to sleep as quickly as possible.

This scene would end up repeating itself 3-4 times from 3-6 am. So I wasn’t getting restful sleep and not helping my baby develop good sleep habits either. Over days and weeks, things were not getting better. They were getting worse! My eyes were more bloodshot each morning as the days and weeks wore on.

In my short time as a parent, I’m finding this a constant battle (with baby 2 and now my littlest one who is nearing 4 months). What I was learning:

The good things are hard to do, and most of the time it isn’t what you want to do. (This is actually true with anything, e.g. exercise, eating healthy, saving for retirement.) This is where the “Best Test” illuminates.

As I pondered my serving leadership role in my family, I knew that my short term “fix” was not only not working, it was hindering us. As the weekend approached, my husband and I decided it was time to let him figure it out. No more pacifier rescue.

What I Learned When I Stepped Back

My husband would keep me strong (and out of the nursery). Here’s how it went:

Not every night is great even now with Andrew (#3), but I am learning to rehearse the “Best Test” goal in those moments. I want the boys to learn to be freer and more autonomous, eventually learning to serve others too.

Right now that means allowing them to calm down and sleep on their own. I know this test will only become harder as the parenting choices get harder. I pray for the strength to be a servant leader, one who serves another without reservation to help them “become healthier, wiser, freer, more autonomous, more likely themselves to become servants.”

How Can You Lead By Stepping Back?

Greenleaf’s Best Test takes on a different view than what naturally comes to mind when the term “servant leader” is mentioned. Most of us think being a servant means you have to be a doormat, giving everything without the expectation of return. It sounds exhausting, and it is!

How terrifying and empowering to the servant leader and the person being served!

Do you remember when someone believed you could do something and stepped back to allow you to struggle through it? Was it a high power presentation, a field assignment, or riding your bike?

Don’t forget: There are those around you who need you to lead them by stepping back. Are you willing to sacrifice today for the sake of reaching a greater goal in the future?