Leadership and Management Advice from the Forbes Essays 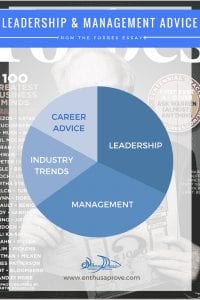 What if you could peer into 100 of the greatest business minds of our time?  What do you think they would tell you?

I subscribe to Forbes magazine because I like to listen to folks I normally wouldn’t, and I normally don’t hang out with billionaires, so I read articles about them. It’s pretty cool to see what makes these billionaire business people tick. September marked the 100th anniversary of Forbes and in their special edition, they published essays from the 100 greatest business minds.

I found myself fascinated by the topics and who said what, so I thought you might be too. I ended up doing a bit of analysis over the essays. There were 82 distinct topics; some were spoken to by more than one person. I transcribed notes from each of the 100 essays about a sentence or two that Forbes had highlighted as the essence of each essay.

The surprising thing was what those great business minds did NOT talk about.

Keeping the source in mind, this is Forbes magazine.  This is for big time business leaders. What do you think when you think business?  It’s easy to think that these business sharks would be focusing on Profit, Loss, Product, Sales Investment, Value.

Did these leaders talk about these? Not really.

What DID those great business minds talk about?

I was sort of taken by surprise that the ex-Beatle (on Ownership), the Hip-Hop Artist (on Customer Service) and the best selling author (on Productivity) spoke to management topics, but not surprised that Warren Buffett (on Investing) and Jeff Bezos (on Transparency) spoke on such topics.

I was touched by J. W. (Bill) Marriott’s line (on Humanity) that the

“The four most important words in business are ‘what do you think?'” J. W. (Bill) Marriott

Is there a course on that in business school?

The last sixth I don’t really know how to name them. Some were just random, some were industry trends like Artificial Intelligence and Civic Mindedness. A co-founder of Microsoft talked about Health Care, while Elon Musk talked about being the first species capable of self-annihilation.

Some of the topics were just flat our fascinating, like why storytelling around a campfire will always be more valuable than virtual reality, and how making money is a happiness, but making other people happy is a super-happiness.

What can we learn from this?

These essays are a more than a soundbite…more like a soundchomp…of the most influential and successful business people across the world.I don’t know if Forbes planned this pile of 100 to have such symmetry, but it sends a cool message nonetheless.  As a group, their collective advice reflects the need to balance leading and managing with a touch of taking care of yourself and the world we live in.

You know that we here at eNthusaProve are all about helping you to enable joy in work by leading in a way that helps your team to connect, create and contribute.

I ’d like to wrap up with some words from the essay by Robert Smith, CEO and founder of Vista Equity Partners, and one of the top 300 richest Americans and the second richest African-American (just bumping Michael Jordan from that title). I didn’t know about Robert Smith until this article. (For you Forbes’ fans, you’re probably wondering why not since he had been on an issue cover; ok, you caught me…I must not have read that September 2015 issue.)

While I found beauty in the absolute truth of machines in the classroom, I found purpose in the messiness of human interaction in the real world. Whatever drives us, we all derive happiness from finding purpose. We find joy in thinking, doing and discovering – in improving people’s lives and catalyzing positive change in the world. And in the age of intellectual capital, where brainpower is the world’s most valued currency, the opportunity to find purpose, and create value that aligns with our values- has never been greater.

Wow… did he just say that joy is based on connect, create and contribute?

If you’d like to get some more nuggets from this collection of essays, make sure to like this article. For example, Motivation, Relevance and Reputation were each topics of more than one essay, and by my interpretation, were addressed by one person as a management issue and by another as a leader issue. Sounds like a good way to compare managing versus leading!

I’d recommend that it’s worth checking out this 100th anniversary edition of Forbes. There’s also a cool Artificial Intelligence version for your mobile device.